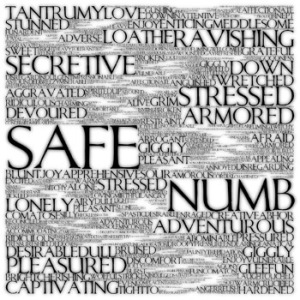 …..and I’m not talking in the material/literal sense. I’m talking about Confusion and Chaos in the emotional/mental sense.

A sociopath has an innate ability to create such mental and/or emotional chaos in us. They use their verbal  communication!! They can say the sweetest of things one minute and then Dr.Jekyll and Mr. Hyde us in the next with a litany of some words I had never heard. They can tell us in one minute how ‘beautiful, special, kind, loving, perfect‘ etc. we are, and in the next ‘damn us to hell’ for being so UN-kind, insensitive, lacking in moral character etc. This roller coaster of verbal attacks leaves us reeling in mental chaos.

And in this state of Confusion And Chaos , we begin to question ourselves. Are we really all of those horrific things the sociopath called us?  Are we really that UN-kind, UN-caring? Do we really lack in moral character? The answer is emphatically NO!!

When we share something in our past with the sociopath, they file this information away, only to be used at a later date. This ‘later date’ is when the first stages of confusion & chaos begin. You know exactly what you had told the socio, say about a good friend. The socio will then take what you said about that person, and turn it around into ‘your just like so & so, you  act just like so & so’.  Or maybe you shared a story about a co-worker with the socio, who once again, takes that and can turn it into ‘i know you want to fuck so and so.’ ‘You 2 deserve to work together, your both the same’.  Or even worse if you had told the socio about someone you dated and/or was married to in your past! They will tell you ‘why your no longer with the ex’ and twist and turn it into you second guess (is that i what i actually told him)???This was an innocent conversation early on with the sociopath, who is now taking all his profile building knowledge and using it as ammunition to cause complete confusion and chaos in our minds. This is how they function~in this perpetual state!

Once you are able to get out from under the dark {spell} of your sociopath, you will then be able to listen, with a clear head, at how they have taken pretty much everything you ever told them and turn it into utter nonsense. Even though, you know, with 100% certainty that you had never told the socio {the story} as it is now being thrown back at you! And if you try and deny it~you are thrown into another tailspin of bullshit about a different person. And worse yet, if you dare laugh while they are in the middle of their dissertation about ‘everything you have ever done wrong in your life’, they will then start to mock you! They will stare at you with that evil empty look.

All of this Confusion And Chaos makes us wonder……how did we even have a  conversation in the very beginning with this person?!?! Because while we were falling in love, they were building their supply source.  While we were thinking about long-term, they were thinking ‘what can i gain’. Because we can feel real love, they cannot. We can rationalize, whereas most sociopath’s have an inability to~this falls into another trait of entitlement.

As hard as it is not to  want to argue back and tell your sociopath to go straight to hell, you have to take the higher ground. In the end, YOU know Who And What You Are! You do not need someone so emotionally disconnected to tell otherwise!

If you would like to contact me, please feel free to send me an email at: TaelaHill@mail.com I would appreciate a donation as I devote a
LOT of personal time to this website and also to your emails. Your donation will be done via PayPal so it is very secure.

27 Responses to “Confusion and Chaos”